Not everyone prefers a God who talks like a pal or a guidance counselor. Even some of us who are nonbelievers want a God who speaketh like — well, God. The great achievement of the King James translators is to have arrived at a language that is both ordinary and heightened, that rings in the ear and lingers in the mind. And that all 54 of them were able to agree on every phrase, every comma, without sounding as gassy and evasive as the Financial Crisis Inquiry Commission, is little short of amazing, in itself proof of something like divine inspiration.

via Why the King James Bible Endures – NYTimes.com.

Join us this Easter Sunday

To celebrate the rising of Christ we will be holding our All Age Communion service at 10am this coming Sunday at St Giles.

Suitable for the youngest through to the most senior among us we will celebrating the triumph of Christ over death using song, drama, and film.

Immediately following the service we will hold our Annual Balloon Release and Easter Egg hunt in the Rectory Garden.

Do join us if you can!

A thunderstorm is rumbling in the dusk over St Giles. It makes these words of Richard Neuhas even more poignant.

The church is dark now. The altar is stripped and bare. Some are getting up and leaving in silence. Others remain kneeling, looking into the darkness. Holy Saturday is ahead, the most quiet day of the year. The silence of that silent night, holy night, the night when God was born was broken by the sounds of a baby, a mother’s words of comfort and angels in concert. Holy Saturday, by contrast, is the sound of prefect silence. Yesterday’s mockery, the good thief’s prayer, the cry of dereliction—all that is past now. Mary has dried her tears, and the whole creation is still, waiting for what will happen next.

Some say that on Holy Saturday Jesus went to hell in triumph, to free the souls long imprisoned there. Others say he descended into a death deeper than death, to embrace in his love even the damned. We do not know. Scripture, tradition and pious writings provide hints and speculations, but about this most silent day it is perhaps best to observe the silence. One day I expect he will tell us all about it. When we are able to understand what we cannot now even understand why we cannot understand. 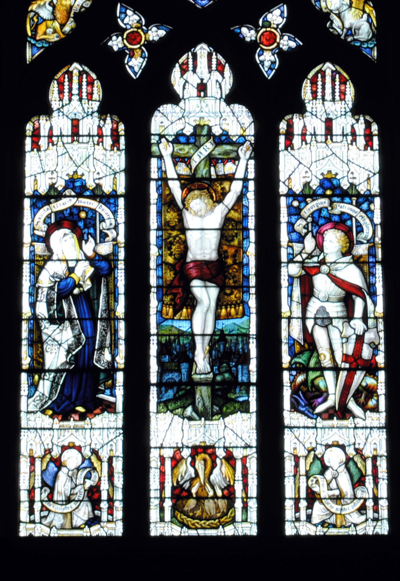 An oil-rich wedge of desert between Iraq and Saudi Arabia at the northwest end of the Arabian Gulf.

The underground Kuwaiti Church is gaining strength, numbers and maturity, and more converted Kuwaitis are making themselves known publicly. These latter believers are gathering for worship, teaching and prayer with boldness and open witness. While those who openly identify themselves as Christian are still a small minority, both this group and the much larger underground are growing rapidly.

Kuwait’s material wealth has answered few problems. The government is divided between modernists and traditionalists. Islamist activity is increasing. Young people are frustrated and very bored. Materialism still holds powerful sway, since many have no greater vision about how to use their wealth for good. Pray that Kuwaiti leaders and people might embrace the Saviour.

Nearly all citizens in Qatar are Muslims; almost the entire Christian population are expatriates. The constitution explicitly provides for freedom of worship, and Roman Catholic and Anglican Churches are officially recognised. However, the Government places restrictions on public worship and continues to prohibit evangelisation of non-Muslims. Several expatriate Christians were expelled from the country in 2010, almost certainly because of their Christian faith. Leaving Islam is considered apostasy; believers from a Muslim background face severe persecution.

Qatar’s Christian communities have been offered land on which to build the first churches in Qatar since Islam’s arrival. A Catholic facility will be followed by Anglican and Protestant buildings. Pray that this will enable greater unity, effective discipling of believers and sensitive sharing of faith.

Qatari believers number but a few. From Arab, Persian and Bantu (former slaves) extraction, Qataris are almost without exception Muslim. Pray that a Qatari church would be birthed and that Qataris at home and abroad would hear about Jesus.

A semi autonomous region of Tanzania; Zanzibar is comprised of the three islands of Unguja, Tumbatu and Pemba which are 97 per cent Muslim.

There is no church on Tumbatu Island and most churches on Unguja Island are for expatriates. Islamic extremism continues to grow, causing problems for Christians yet at the same time causing many to seek Jesus. Registration of churches remains difficult. Believers still struggle to gain access to jobs and education. Reaching Muslims with the gospel remains very difficult.

Today we are Praying for Yemen

Islam is the state religion and sharia (Islamic law) is the source of all legislation. There is some religious freedom for foreigners, but evangelism is prohibited; several expatriate workers were deported in 2010. Yemenis are not allowed to leave Islam; those who do may face persecution from family, the authorities, or extremist groups. Insecurity caused by terrorist movements and separatists made Yemen very unstable in 2010. Four of the nine foreign Christians kidnapped in June 2009 remain missing.

Increasing numbers have encountered Jesus. Despite difficult circumstances – opposition from culture, religion and families – increasing numbers are finding life in Christ. Through radio broadcasts, Bible distribution, tactful faith sharing and the Lord’s use of dreams and visions, God is drawing more and more people to Himself. At this point, they meet secretly and only in small groups. Praise God for the growing number of followers of Jesus who are learning how to honour their culture and family while still being faithful to the Lord. Fewer seek to emigrate as they understand that they can be faithful followers without travelling to the West.

Yemen has suffered almost unending conflict over the last four decades – three civil wars, conflict with neighbouring states, the effects of the Gulf War, Somalia’s collapse into anarchy, the Ethiopian/Eritrean war and tribal skirmishes. Tensions between Shi’a and Sunni Muslims make Yemen ripe for sectarian violence, to the point of insurgencies or even outright civil war. The treasured right of Yemenis to bear arms fuels tribal rivalries, while kidnapping, crime and sabotage are common forms of protest and fundraising. There are between three and four firearms for each person in the country. Pray for a fair and just government that will bring about national unity and peace.

Pressure on new Christians comes from relatives and the extended family network, as Tajik identity is associated with being Muslim. Changing religion brings great shame on the family. Teaching Christianity to children is a very sensitive issue in the country. However, government control on religious activities has also increased and the import or distribution of Christian literature is very restricted. Christians active in outreach risk harassment, beatings and, occasionally, arrest.

The birth of a Tajik Church, although a slow and painstaking process, is now reality. The Church among Tajiks is small, only a thousand, but growing.

The civil war left an indelible mark on the nation, which is still recovering more than 10 years later. Hardship is widespread, with 83% of the population under the poverty line. The most vulnerable segments of society particularly at risk are prisoners, elderly, widows and orphans.

I'm the vicar of St Giles and Something Else West Bridgford. This is very much a personal blog, all opinions are my own!